It's Ready! Come on over to AuthorAppleton.com

It has been a good run but now it is time to say goodbye to the Flaming Pen blog in favor of focusing on my new blog-centric website AuthorAppleton.com

I want to express my sincere thanks to you, my readers, for supporting me as my writing career continues to grow. And I do hope that all of you will transition over to the new website this coming Monday for new blog posts! Please update your links to my site so that you point to www.AuthorAppleton.com 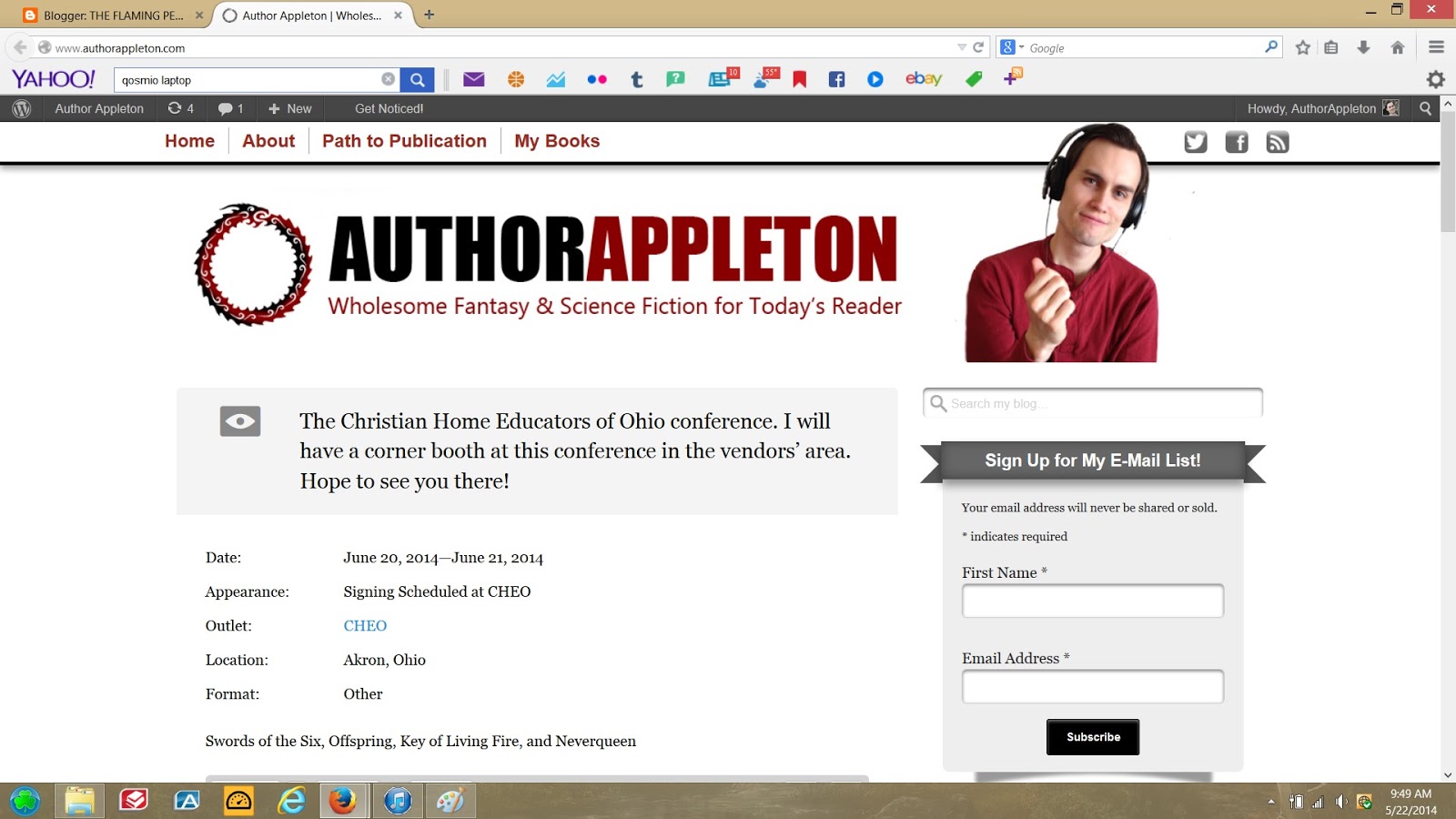 This is an exciting time to be able to focus on Wholesome Fantasy & Science Fiction. Please join me on Monday, May 26th for my introductory posts on my New Blog. Here are the immediate advantages:

Posted by Author Scott Appleton at 10:04 AM 2 comments:
Email ThisBlogThis!Share to TwitterShare to FacebookShare to Pinterest

If you are planning to attend or know anyone who will be attending CHEO (Christian Home Educators of Ohio) June 20th & 21st, please look me up in the Exhibit Hall! I will have a corner booth so it should be easy to spot me.

It has been a long while since my last book signing and I've missed it. So pumped about this! 2,500 expected in attendance. Please visit the CHEO website http://www.cheohome.org/

Hope to see some of my Ohio readers there and meet many new ones! All of my novels will be available for purchase and signing. This includes Swords of the Six, Offspring, Key of Living Fire, and this will be the first signing for my latest release Neverqueen!
Posted by Author Scott Appleton at 11:23 AM No comments:
Email ThisBlogThis!Share to TwitterShare to FacebookShare to Pinterest

Dragons in Film: the ugly and the great!

It is hard to imagine a better rendition of a dragon than what I recently watched in The Hobbit: the Desolation of Smaug.

Cinema has always struggled with making realistic dragons. Personally I found the Eragon dragon to be a shock when I saw feathered instead of leather wings. It just was not... threatening. More like a giant bird.

An impressive attempt was made in the movie Dragonheart. Sean Connery voiced the dragon in an effective manner. However the movie was filled with a lot of humor as well that took some of that dragon threat away... And a later attempt to create a sequel made the dragon animation feel and look like a video game.

In the Hobbit the standard is finally raised. Smaug was crafted to perfection! This movie really was fantastic and the dragon is what made it so. Not only were the special effects believable, but the characterization of the dragon was spot-on. Smaug is the epitome of a greedy, spiteful creature whose pride (amazingly) manages to fill the screen more than his tremendous length.

Let's hope this will open the door for other fantasy films on the level of The Desolation of Smaug where the dragons are true monsters with intelligent minds!
Posted by Author Scott Appleton at 8:45 PM 2 comments:
Email ThisBlogThis!Share to TwitterShare to FacebookShare to Pinterest
Labels: dragon, dragons, fantasy, movies, peter jackson, the hobbit, Tolkien

With great interest I have been watching the Noah movie buzz spread through the Christian community. Much of the reaction has been negative, centered around inconsistencies between the Biblical account and the movie's interpretation.

The push against the film has made me all the more curious to see it (which is the opposite reaction the gainsayers want to see, I'm sure).

Not having seen the movie yet, I just want to say that I am looking forward to trying it but I do not anticipate it being accurate to history. This is a Hollywood project, folks! Do you really think that is their intent? I think they saw it as an opportunity to make money. And why not? It has been a long time since Hollywood has generated something on this scale that gets people talking about biblical accounts, Christianity, and all that goes with it.

Let's not over-analyze fiction. Take it for what it is: an interpretation and artistic expression inspired by circumstances and/or events, etc. I have often--and I do mean often--come across readers who are reading too deeply into my own fiction for hidden meanings and such. Often they come up with ideas that have no bearing on the author's original intent.

In closing, let me say that, having not seen the movie, I may hate it. Who knows? But I enjoy an entertaining movie and I don't have to agree with the worldviews expressed in it in order to enjoy it. If it was claiming to be a historical documentary, that would be a different scenario. (-:

Your thoughts on this?
Posted by Author Scott Appleton at 12:50 PM 4 comments:
Email ThisBlogThis!Share to TwitterShare to FacebookShare to Pinterest

Tell one character's story at a time?

The challenge I have when writing is to focus on one portion of the story at a time and one character's point-of-view at a time. I am not a great multi-tasker. I can do it, but I am at my strongest when I focus on one thing at a time, placing my greatest energies into accomplishing it.

When I wrote Swords of the Six, Offspring, and Key of Living Fire I told the stories from multiple characters' points of view. But in Neverqueen I focused mostly on Violet's story. The result was a focused story arc that I found easier to write.

Currently I am chipping away at In Search of Dragons. Ilfedo is the focal point in this story. He has left some of his grief behind and is greatly focused on preserving the heritage and future of his nation.

The great search for the dragon Venom-fier has begun!
Posted by Author Scott Appleton at 12:15 PM No comments:
Email ThisBlogThis!Share to TwitterShare to FacebookShare to Pinterest

One Year Devotional for Fathers and Sons

I'm not sure exactly how this came to be, but the recent encouragement I received from several Christians has led me to start writing a book I did not intend. It is a 365-day devotional for fathers and sons and will deal with a wide array of subjects with encouragement from Scriptures.

The pitfalls of my own life, sins I fell into and unwise choices I made, have resulted in innumerable notes and short articles that I have only shared with a few immediate family members. Other choices I've made have benefited me and those around me greatly. I pray God gives me wisdom to create a string of devotions that will get fathers and sons talking to each other openly about the issues they face. As well, I hope it will be of great encouragement to these men.

A couple of title ideas are battling for supremacy on the forthcoming book. I would love to know which title stands out to you! I am putting this up on a poll on the blog's sidebar as well.

Title options are:
By the way, if you have other title ideas or suggested changes, please voice them!
Posted by Author Scott Appleton at 12:08 PM No comments:
Email ThisBlogThis!Share to TwitterShare to FacebookShare to Pinterest

Not a hero? This is where our society has come; Winter Olympics

I know this is going to show how disconnected I am from mainstream media, but I just learned of the outcry concerning Russia and the controversy involving their stance against homosexuals.

I am not going to beat this dead horse. You all know by now that I firmly stand against the homosexual lifestyle, and I do not want to bash the LGBT. But it is an affront to God and to a godly society, and I must declare what is true.

Corporations and the media flood the internet with support for the LGBT. Let this be a reminder of how fallen our world is and of how holy God is. The LGBT are not heroes, folks.

The heroes are conservative men and women who stand for the truth of the Word of God and are willing to pay the price when they are alienated by society.

We should not resort to bashing the LGBT, but we do need to instruct our youth to look through the "smoke screen" and see the real problems that underlie the bitterness and conflict. Sin is present and strong as ever. The Devil is a real force in this world and he wants all LGBT to continue in their blindness on a path into Hell.

Christian, this should bring you to tears and put you in mind of how blessed you are to have Truth and Life.
Posted by Author Scott Appleton at 10:58 AM 2 comments:
Email ThisBlogThis!Share to TwitterShare to FacebookShare to Pinterest
Older Posts Home
Subscribe to: Posts (Atom)

WELCOME TO THE WRITING SITE OF SCOTT APPLETON

"Pleasant words are as an honeycomb, sweet to the soul, and health to the bones." -Proverbs 16:24

In a world where morality is forsaken and Christ neglected, wholesome books are uncommon. The themes of my writing are love, self-sacrifice, and honor.

I see my generation turning from God to the gods of this world. I see homes torn apart in the pursuit of pleasure and self-gratification. Children are murdered by the millions every year . . . without ever seeing the world outside their mothers' wombs. Through fiction I strive to encourage those who are willing, to stand against these things and be heroes and heroines; chivalrous, gentle, full of righteous indignation, and the fear and love of their Creator.

This is my old blog. For all the New Content and New Books go to AuthorAppleton.com

Did you read it yet?